A day on the peninsula of Snæfellsnes

During your trip to Iceland, leave Route 1 and go and explore the peninsula of Snæfellsnes and its marvels!

On the road north

Continuing along the road from Borgarnes, make your first stop at Ytri-Tunga, situated near the ocean, where you may have the chance to see seals on the beach or on the surrounding rocks. Make sure you don't upset them by getting too close, but watching them play or sunbathe is a real pleasure!

Continue on your journey and stop at Búdir. Although the village no longer exists, the black timber church is still there in the middle of the Budahraun lava fields.

The next stop along the coast is Arnarstapi. It is a small village and fishing port that overlooks sea caves and basalt columns. You can also see colonies of birds nesting in the cliffs there. The natural arch of Gatklettur is particularly spectacular. A statue of Bardur Snæfellsas, half-man and half-ogre, guards the peninsula and has given it its name. 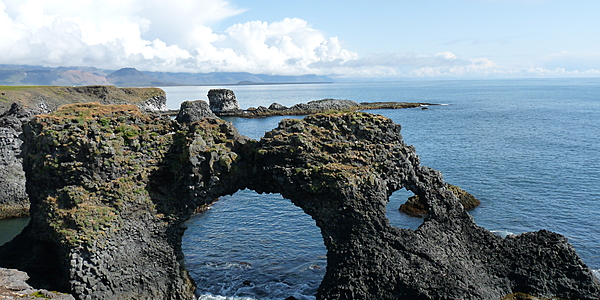 An hour's walk away is Hellnar, which was the most important fishing village in the area for centuries. The enormous rocks are take a spectacular form, evoking trolls turned to stone when surprised by the light of day. There are also several caves overlooking the sea.

Then, at the foot of Snæfellsjökull, make a stop at Djúpalónssandur, a sandy beach situated near the glacier. There you can see 5 stones ranging from 23 kg to 154 kg, which, according to tradition, allowed the fishermen's capacity for hard work to be evaluated.

To the north of the peninsula, there are several interesting and distinctive fishing villages. The church in Olafsvik has a distinctive and well-conceived shape that reminds you of fish. Then, in Grundarfjordur, the mountain of Kirkjufell situated near a lake and waterfall, looks like a church. The road then leads you to Stykkishólmur, passing by a huge lava field and giving you the impression of being alone in the world. There is a church there as well, whose architecture is quite futuristic rather than traditional. 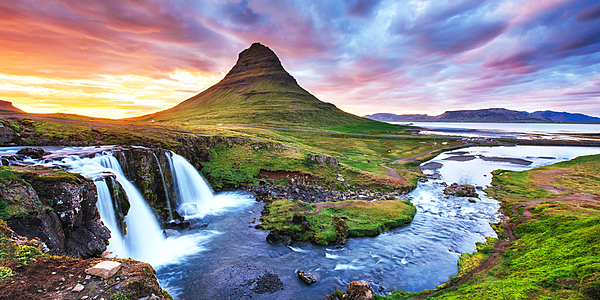 If you have more than a day ahead of you on the peninsula of Snæfellsnes, you can go hiking for a few hours... Here are some of the hikes you can go on. (Naturally, this list is far from exhaustive; don't hesitate to find out more information at the tourist information offices in the region.)

A 3-hour hike through the lava fields of Budahraun will allow you to discover native Icelandic species of flowers and ferns. The place is supposedly overrun with elves.

A hike of 2 hours and 30 minutes from Arnarstapi to Hellnar and back will take you along the coast and you will see the rocks and cliffs that have been sculpted by nature and the waves. They are really quite impressive.

The region is dominated by Snæfellsjökull, the glacier where the Journey to the Centre of the Earth began. If you are an experienced hiker, you can try to climb the glacier. Arm yourself with a map because the markers are not always present all the way along the path. Moreover, different paths have varying levels of difficulty. Whichever you choose, the view from the summit of the lava flow and the plains will be just magnificent.

The hike up Kirkjufell is difficult, so a guide is recommended. It will lead you to places where bird and fish fossils have been discovered.

The peninsula of Snæfellsnes is really easy to access from Reykjavik. You can go there by bus if you have not hired a car, which will allow you to see splendid landscapes that are typical of the country, such as the lava fields or the cliffs looming above the waves. Furthermore, between the end of October and the beginning of March, the scarcity of people is favourable for observing the northern lights because there is little light pollution. And if you come to Iceland at another time of year, take the time to admire a sunrise or sunset over the sea by spending a night on the peninsula.